There is no denying the fact that electric vehicles are the future. With the number of countries thinking of imposing bans on the sale of combustion vehicles, it makes sense for the public to invest in electric mobility. But the general consensus is that there is still some hesitation among the people. There are two main factors contributing to the doubts in the minds of people – range and prices. Will an electric vehicle have sufficient range in order to prevent any disruptions to our day-to-day lives? How much extra will we pay owing to charging costs and the overall higher cost of ownership for electric vehicles?

It is safe to say that the rate of progress in the field of battery technology is improving by the day, and pretty soon, these doubts about the range of electric cars will cease to exist in people’s minds. Cost Of Owning A Tesla

And of course, to answer the question about cost, many current electric vehicle owners are doing their bit for removing these reservations. A YouTuber named “Tall Tesla Guy” recently posted a video about the actual cost of owning a Tesla Model Y as compared to a Volkswagen Tiguan.

Mr. Tall Tesla Guy mentions that he owns two cars currently, a sedan (which he didn’t elaborate on) and a Tesla Model Y. It is the all-wheel-drive Long Range variant of Tesla’s crossover. Previously, he owned a Volkswagen Tiguan along with the sedan, before he decided to make the switch. One of the most important factors contributing to this discussion is the insurance cost, he feels.

When he owned two combustion vehicles, he used to pay roughly $155 per month for insurance. After buying the Model Y LR AWD, this monthly cost went up to $172. And this really shouldn’t surprise many people. It is a known fact that the insurance amount for Tesla vehicles is higher than most combustion vehicles. This is due to the limited authorized body shops and the higher cost of repairs. Of course, the Tiguan is a less expensive vehicle than Model Y, and so, insurance for the Tesla would automatically cost more. So it has more to do with owning a more expensive car than an electric car.

Charging cost is another major contributing factor to the electric vehicle discussion. Now, this comes with a lot of variables. A 110V home charger can work, but it takes a lot of time to charge, especially for large battery packs. Going to a Supercharger is much faster, but it can definitely increase the cost significantly. What he has done, however, is install a 240V home charger. While it may be a slightly higher initial investment, it has added benefits. You can easily charge your vehicle overnight, and it doesn’t cost a lot (30 cents per kWh).

The added electricity cost of charging the vehicle every day is roughly around $12-15 per month. Of course, this depends on how frequently you charge your car, and what level of state-of-charge do you charge it to. Generally, having your vehicle around 80% of the battery capacity can be more than sufficient for your daily commute. For longer trips, you will need to charge it up to 100% to prevent taking more charging stops.

In comparison, however, the Tiguan that he used to own would require up to $40 per week of fuel. That amounts to $160 per month on fuel alone. The extra $12 suddenly seems worth it.

Then come the tires. Now, owing to the additional torque that an electric car generates, the tires do end up suffering more. Of course, he hasn’t owned the Model Y for that long to check the life of its tires. But even then, Tesla charges around $300-350 per tire. That amounts to $1,200-1,400 for a new set, while he used to pay $1,100 for tires on the Tiguan. Of course, if you go for a normal dealer and not go to Tesla for a tire change, you may end up saving that money.

In general, $12 extra for electricity and $15 extra for insurance per month is where the Model Y loses. But it saves $160 of gas per month, and that’s a pretty sweet deal. Considering the fact that Model Y is an upgrade over Volkswagen Tiguan, the extra purchase cost doesn’t seem all that bad, especially after seeing how much you’re saving per month.

Case Study 2: Tesla Model 3 vs Toyota Camry vs Audi A5

Tesla had launched the Model 3 in 2017, and it was fast becoming one of the most sought-after vehicles in the electric market. By 2019, it was one of the most popular electric vehicles, given the kind of features and performance specs it offered at under $50,000 (Performance variant cost close to $60,000). At this time, it was being compared to some premium sedans from BMW and Mercedes in terms of performance. But when you pit a Toyota Camry against it solely from a financial perspective, you’d expect the Camry to win.

Toyota Camry is an entry-level car for premium sedan fans. It is reliable, but it isn’t as much fun to drive, definitely not when compared to Model 3. When Loop Ventures, a tech-oriented venture capital firm, carried out a case study in 2017, the results were clear. Model 3 costs 40% more than Toyota Camry to purchase, and over five years, the ownership cost for the electric car would be 13% higher. Of course, this study was done on the basis of predictions of electricity costs. But then, they decided to do the study once again in 2019, as they had clearer figures for electricity and maintenance costs for Tesla.

When Loop Ventures sat down with their calculators to do the math, Model 3 was priced at $38,900, while the Camry cost around $24,000. Owing to the higher initial cost, the financing for the Model 3 was also higher – close to $2,800 compared to Camry’s $486. These are significant savings you would make if you opted for a Camry over a Model 3 at that time. Unfortunately for the people who actually did that, that’s where the savings stop.

Insurance costs for Tesla were lower than those for Toyota at the time, and over the five-year period, it would cost a Model 3 owner around $5,600 compared to Camry’s $6,100. Then comes the ‘fuel vs electricity’ cost. Model 3 would require just over $2,000, while for the Camry, that figure is more than $8,000. Add to that the maintenance costs that a Camry demands, and you end up saving another $3,000.

So there you go, an electric vehicle that costs less to own over five years than a Toyota Camry, and yet offers performance close to some of the premium sedans from BMW and Mercedes – Tesla Model 3.

Cost Of Owning A Tesla Model 3 vs Audi A5

This shouldn’t even require a calculator. A5 costs $6,000 more to purchase, $400 more for finance and $2,400 more for insurance. Fuel costs are close to $8,000 more than electricity costs for Model 3, and maintenance is twice that of a Camry. Overall, it costs $0.80 per mile to own an Audi A5 over five years, a little less than twice that for Model 3.

This comparison was done to see how Model 3 compares with sedans ‘supposedly’ in its class in terms of performance. But it is quite clear who’s the winner.

An Overview Of Ownership Costs for Electric Vehicles

Last year, Kelley Blue Book, a vehicle valuation and automotive research company, also did some calculations of their own. According to them, if you’re driving your car for 1,000 miles (1600 km) per month and paying 10 cents per kWh of electricity, then you end up paying around $25-33 more per month. This depends on which vehicle you use and which home charger you use. For a combustion vehicle, you pay $100 per month for fuel for 1,000 miles.

They compared Model 3 Long Range with Honda Accord, and it says you require $500 per year for charging the Model 3. In comparison, the Honda Accord requires more than $1,000 for fuel per year. Calculations are done using 15,000 miles of running per year and average rates of fuel and electricity. Of course, this will change based on your frequency of using Superchargers, driving habits and whatnot. But the cost is still more than twice for a Honda Accord.

And Tesla claims that even if you’re using a Supercharger, you still pay less than what you would for fuel. They say for 1,500 miles (2415 km), you pay $100 for a Supercharger as compared to $153 for fuel in a combustion vehicle. 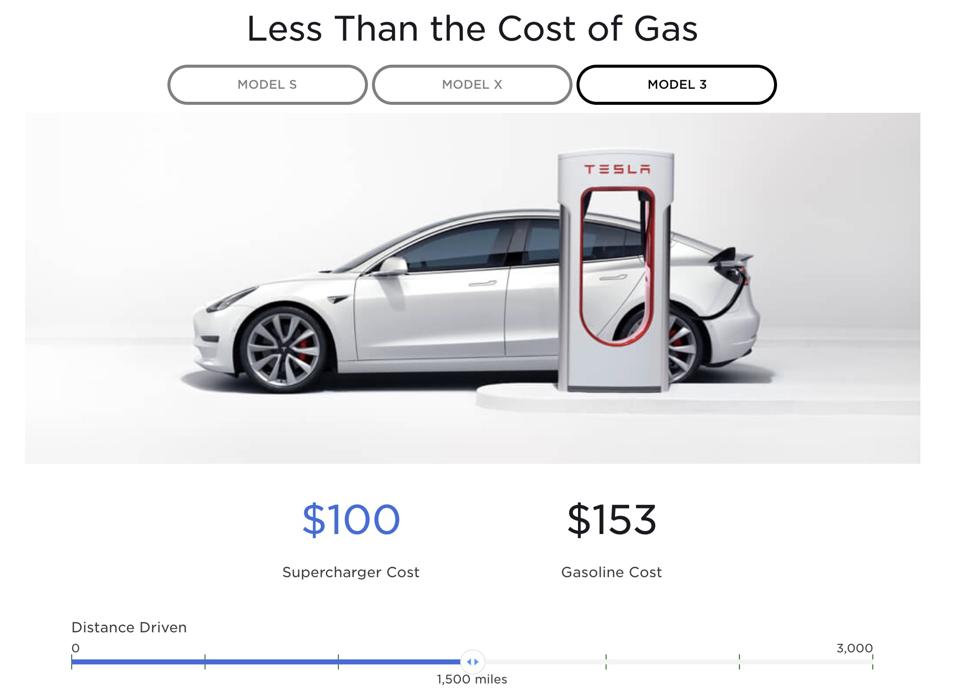 All this says one thing – Tesla vehicles are cheaper to own than combustion vehicles. Yes, you may end up paying more upfront, but the amount of money that a Tesla car saves easily nullifies that. Referring to the Camry vs Model 3 study, the breakeven is achieved in less than five years. Superchargers cost less than a trip to the gas station. Insurance, electricity costs, financing can vary from company to company, and across states too. But the bottom line is you do end up saving money. Not to forget the warm fuzzy feeling you get of doing something for the planet.