Sandy Munro is back with another prediction. Munro associates, his company, provide a variety of reports based on their observation of the breakdowns. Sandy had predicted Tesla to shift from a 2170 cell to a bigger and more robust battery. This was confirmed when Tesla announced the new 4680 cells.

4680 means a cell with diameter = 46mm and length = 80. We have already covered the major announcements Tesla made on Battery day. Yesterday, Sandy uploaded a thanksgiving special video. In the video, he explains the possible arrangement of Tesla’s next-gen 4680 battery pack. However, to understand the arrangement we need to look at the cell first.

As mentioned before, 4680 means a cylindrical cell with a 48mm diameter and 80mm in length. The cell is definitely an improvement in 2170. It promises five times more energy, a 16% range increase, and six times the power output. The construction of the cell is simple to understand. Tesla has eliminated the interconnection of cells. They have been able to achieve this by replacing the tabs with laser-patted plates. The plates will act as electrodes. 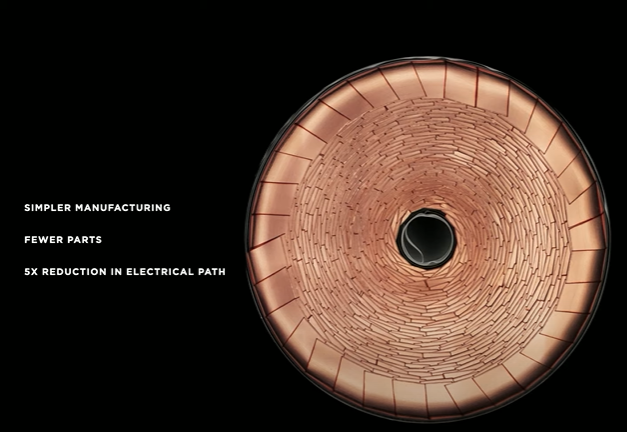 The replacement of tabs with plates is clearly visible.

The second issue in question is the thermal management of these cells. In the old packaging, each battery cell is wrapped in a micro-channel extrusion, which carries the coolant to cool the battery. With this packaging, cells are cooled at the edges i.e from the side, but this is not the best way to cool. In reality, the battery heats up at the top and bottom edge. Hence, the best way is to cool the bottom of the battery cell. The 4680’s architecture allows the cells to be cooled from the bottom. Therefore, the batteries no longer need their own “cases” to cool them. Let’s look at what Munro thinks could be the new battery-pack arrangement.

Breakdown of the Possible Battery-Pack Arrangement

To make this possible arrangement easy to understand I have broken it down into points.

A module is an arrangement of a fraction of cells. . The pattern is repeated in all the modules. Sandy believes that the new battery pack will have 4 modules. The total 4680 units required are 960. Thus, each module may have 240 cells.

Let’s look at how these 240cells are arranged within a module.

The pattern inside the Module

According to Sandy, the pattern inside the module will look like this.

The pattern includes 24 rows. A row will have 10 cells apiece. The total comes to the expected 240 cells. The red dots indicate the positive electrode and the black indicate the negative electrode. As explained earlier, this arrangement is possible only due to the elimination of tabs.

All the negative and positive electrodes connect to their common collector sheet. This sheet will have a design as per the electrode. This collector sheet design dictates the arrangement of modules.

The Arrangement of Modules

All the modules together make the battery-pack. Sandy expects the module arrangement will be somewhat like this.

We can see that the negative end of the battery is a single wire on the outside. There is a loop of wire between two consecutive modules. This looping is on either side of the module. It is the positive side of the complete battery pack. Finally, it ends alongside the negative end’s wire. To understand the arrangement better imagine a module as a common cell. The image below indicates modules as common cells: The need and impact of the 4680 cells and its arrangement

Tesla’s goal is to develop a battery that costs $100 per kilowatt-hour. This is a price target necessary to make the cost of electric vehicles competitive. Current battery packs cost around $150 to $200 per kilowatt-hour. At Battery Day Tesla confirmed that the cost per kWh will reduce by 50%. Multiple factors will play a role but the cell architecture itself will contribute 14% of cost reduction.

We know how much 4680 improves the energy, range, and power of the vehicle. However, it is important to acknowledge the redesigning of the cell. Many people may ask: why not modify the existing battery pack? The answer is that good design cuts down half the work required for achieving a target. Thus, designing a superior cell (4680) is better than modifying the old battery pack. Tesla will require 960 units of 4680 cells compared to 4,416 of the 2170 cells. Hence, Tesla’s idea to redesign the cell is justified.